What I am going to show you today belongs to the IoT temperature sensing project that I have been documenting over the last days and that you can find in my Youtube channel.

Today I will show you the initial stage of an additional module programed in C and running on a Texas Instruments MC3220 microcontroller with the Texas Instruments Real Time operating System. This module will read the temperature of remote sensors linked using a Sub 1 Ghz MASH network. Stay tuned for the coming videos.

Now, from this setup, we will focus on the red pcb, a launchpad for the Texas Instruments CC3220 MCU. The firmware that I have developed is already installed and running.

What we have here, in this stage directly on the lcd of a multimeter. This multimeter is connected to a Pulse Width Modulated Analog output to which also an LED is connected. 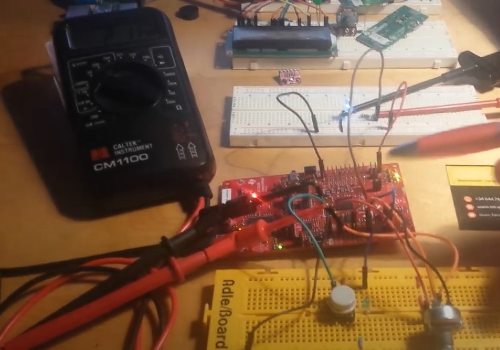 Since our Analog input is converted to a digital value, we will have to calibrate it. Also the conversion from the digital value read will have to be adjusted so that a Pulse Width Modulation can reproduce the initial voltage. We will look latter to the graphics and related analysis to understand it better.

The architecture is the following: a Real Time operating System, a Firmware running two threads, one for reading and one for writing, a callback for the calibration push button and a General Purpose IO to turn on the calibration LCD. Instead of a temperature sensor we will use a variable resistor and calibrate the readings. We will measure the Voltage in, the ADC value and the Voltage out for a given pulse width.

Let’s have a look at it and to what happens without a calibration and adjustment:

At this side of the board we have the variable resistor and a push button to enable the calibration. I’ll push it latter.

At the other side I have an LED that lights depending on the PWM and also a multimeter that measure the Voltage out.

Before going into the mathematics I will push the calibration button and see how the reading at the input and the output are the same for all the range.